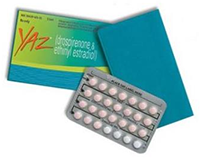 Birth control medications are now part of everyday life for millions of women in the United States, and it hasbecome a multi-billion-dollar market. As a result, companies are working tirelessly to formulate and release new birth control drugs that are designed to meet this need.

One of those products is known as Yaz, and its manufactured by Bayer Healthcare. Yaz has produced positive results but has also encountered some serious problems. Below you’ll find information regarding how Yaz works inside the body, the side effects that have been linked to Yaz, other problems that the makers of Yaz encountered with the government, how these problems have been handled by individuals and ultimately how you should proceed if you’ve been harmed as a result of using Yaz.

Yaz Birth Control and the FDA

Yaz is a birth control medication that exists in pill form and is provided via prescription. It originally obtained approval for marketing, sale, and distribution from the United States Food and Drug Administration (FDA) in 2006. It works by releasing small amounts of two different hormones into the female’s system. These hormones are known as drospirenone and ethinylestradiol, and they are the active ingredients in the drug.

Generally, Yaz produced early results that were positive, but it wasn’t long before the product encountered problems on more than one level.

Yaz was also used for two different off-label purposes, which in itself can be controversial since off-label uses mean by nature that the product was never approved for these purposes. Specifically, Yaz was used to treat the symptoms of PMDD or premenstrual dysphoric disorder. These symptoms include anxiety, irritability, lack of sleep and confusion. Yaz was also used to treat the symptoms of acne.

Unfortunately, Yaz was soon linked to the development of several side effects, all of which were dangerous and potentially fatal in certain situations. These side effects included:

In addition to the side effects that were linked to Yaz, Baxter Healthcare also encountered problems with the government relating to the advertisements that were running in conjunction with its release. In these advertisements, Yaz was purported to be safer than it actually was by glossing over the side effects. In addition to this subtle message, Yaz was also subtly positioned to treat the symptoms of premenstrual syndrome, or PMS. Yaz was never approved for this use.

In response to the link to side effects, the public also began to act on an individual basis. Yaz lawyers began to field incoming inquiries and several civil lawsuits were filed across the country in an attempt to win verdicts of damages for the medical expenses incurred as a result of the injuries they suffered.

As of now, other than the warnings issued by the government in response to the advertisements described above, no official action has been taken in regards to an order to attach a warning to the products containers or to initiate a recall of Yaz.

If you or someone you love has been harmed as a result of using Yaz, you need to contact the defective drugs lawyers at Phillips Law Group today to schedule a free initial consultation. You need sound answers regarding your situation in order to proceed properly, so contact the firm today.