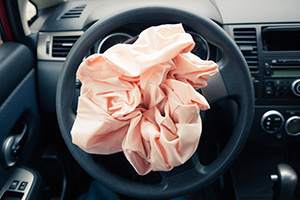 Two large automobile manufacturers, Toyota and Honda, have expanded the number of vehicles added to their Takata airbag recall list. The expansion occurred after yet another fatality was reportedly associated with an apparent defect in the Takata airbag.

Have you or someone you love been injured by a defective Takata airbag? Our experienced attorneys can help explain your legal options.

The seventh death associated with the airbag occurred in a manner similar to the preceding six fatalities. In each case, the airbag on the driver’s side deployed improperly and in a manner that resulted in the device exploding fatally wounding the driver.

With the latest fatality, the number of automobiles recalled rose an additional 1.4 million. Ultimately, it is now estimated that nearly 40 million vehicles may end up subject to the recall due to the defective Takata airbag system.

Toyota has added the Corolla, Corolla Matric, Seuoia SUV and Lexus convertible to the list. It is the second time in nearly one month that Toyota has added to their list of recalls. Honda is recalling additional Accord and Civic models. The seventh victim of the defective Takata airbags was driving a Honda Civic at the time of the accident.

The latest death has given rise to a question of whether or not automobile manufacturers that may utilize the Takata airbag system in question have provided or are providing recall notices in a timely manner. There is some issue as to whether the latest person killed received the recall notice at all, although the manufacturer contends it mailed it three days before the incident.

Anyone in Arizona who has been injured as a result of the Takata airbag defect is best served by engaging the professional services of a Phoenix Takata airbag injury lawyer.

The experienced trusted PHX personal injury lawyers at Phillips Law Group understand what needs to be done to protect a client’s rights and interests in a case arising out of the Takata airbag recall. This includes cases involving injuries as well as those in which the product defect resulted in the death of an automobile occupant.

A member of our team will schedule an initial consultation about the Takata airbag recall matter at no charge. In addition, as a general rule, our lawyers do not charge a fee until a settlement or judgment is obtained for a client.