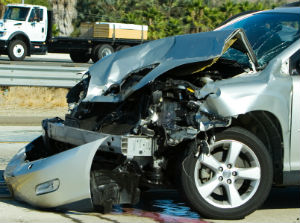 A wrong-way collision Sunday morning has local officials concerned that recent safety incentives may not be enough to decrease the rising number of such accidents in the Phoenix area.

Five people were injured in Sunday’s crash, including three children, making it the sixth wrong-way collision in the past five months that caused serious injury or death to Phoenix motorists.

Around 2:40 a.m., a Jeep Cherokee traveling east in the westbound lane of Loop 101 struck a minivan carrying a local Glendale woman and her three children. The father of the children was following the minivan in a separate vehicle and witnessed the crash.

Troopers were called to the scene and determined the mother and two children sustained non-life-threatening injuries, while one child suffered head injuries that required medical treatment. All three children, ages six, four and one month, were transported to Phoenix Children’s Hospital immediately following the crash. Troopers credited the mother with saving her children’s lives by ensuring they rode in the back seat with their seatbelts on.

The wrong-way driver, a man whom troopers believed to be in his mid-to-late 30s, was taken to Honor Health Deer Valley Medical Center with severe, potentially life-threatening injuries. According to local authorities, the exact cause of the collision has not yet been determined, but impairment due to drugs or alcohol has not been ruled out.

State troopers closed down the westbound lane of Loop 101 near Seventh Avenue and 19th Avenue for several hours after the crash.

In an effort to decrease the number of wrong-way accidents, the Arizona Department of Transportation (ADOT) erected large “Do Not Enter” and “Wrong Way” signs at several highway exit ramps. ADOT also added large, reflective arrows that indicate the correct direction of travel on certain exit ramps.

However, despite ADOT’s efforts, wrong-way accidents continue to rise in Arizona, and safety advocates and local officials fear the current precautionary measures are simply not enough.

Many believe that ADOT should install electronic sensors that are able to detect wrong-way drivers as they enter an exit ramp. Upon detection, the sensors immediately send a signal to law enforcement officials. Currently, such sensors are used on only two exit ramps off of Arizona 101.

If you or someone you love has been seriously harmed by a wrong-way driver, call the Glendale auto accident lawyers at Phillips Law Group today. We can help you get the justice and compensation you deserve.