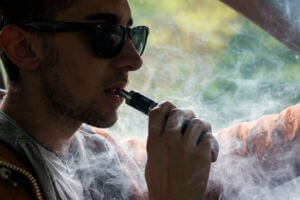 Electronic cigarettes (e-cigarettes) are battery-operated devices that deliver a vapor, which provides users a similar sensation to inhaling tobacco smoke, but without the smoke. Using these devices is also called vaping.

E-cigarettes were first marketed as a safer alternative to smoking cigarettes and tobacco. However, new studies, research and lawsuits suggest that may not be true. Given the popularity of e-cigarettes, many people could potentially be at-risk for severe health problems related to vaping.

The popularity of e-cigarettes has grown dramatically since they were introduced in 2007. By the summer of 2018, nearly 11 million Americans were vaping. There are more than 460 brands of e-cigarettes and more than 7,500 flavors of vapor. Sales of Juul, one of the most popular brands, increased more than 600 percent from 2017 to 2018.

Unfortunately, e-cigarettes have become very popular with young people, and e-cigarette use by young people is a major public health concern, according to the New York State Department of Health:

Maxwell Berger, a Syracuse University student, recently sued Juul after suffering a stroke and spending 100 days in the hospital.

His lawsuit states the stroke was a “direct and proximate” result of his use of Juul products. Two years after first using the product, he suffered a massive hemorrhagic stroke, paralysis on his left side, 50 percent loss of vision and cognitive problems, according to the lawsuit. He also had to get three brain surgeries.

Research shows many e-cigarette users could be at risk for serious side effects, including strokes.

A survey sponsored by the U.S. Centers for Disease Control and Prevention (CDC) and other federal agencies, based on data on over 400,000 participants, indicates that people using e-cigarettes have increased health risks, including:

Research presented at the American College of Cardiology’s 2019 Scientific Session also shows vaping puts people at an increased risk for some of the same health problems.

According to the research, users of e-cigarettes have a:

In late July in Milwaukee, eight teens were hospitalized with severe lung damage that doctors suspect was caused by vaping.

Jonathan Meiman, chief medical officer with the Wisconsin Department of Health Services, said it is unclear exactly what the teenagers had inhaled. In early interviews, teens mentioned nicotine and THC, he said.

Symptoms that led to the youths being brought to Children’s Hospital of Wisconsin included extreme coughs, severe fatigue and shortness of breath.

The teenagers looked sick and were struggling with their breathing, said a pediatric pulmonologist from the hospital.

A 26-year-old man from Burlington was also hospitalized and in critical condition after vaping THC, the chemical in marijuana that can cause psychoactive effects, from a cartridge he bought on the street. The man suffered serious lung damage and his heart was weakened.

If you or someone you care about suffered any injuries or side effects from the use of e-cigarettes, you can discuss what happened with our experienced Phoenix product liability lawyers. Your consultation is free and comes with no obligation to take legal action, so there is no risk to you.