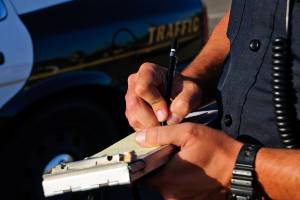 Most auto accidents in Arizona involve one or more violations of traffic laws. Victims and their attorneys often cite these illegal maneuvers when seeking compensation for damages from a crash.

While crashes could involve a wide variety of traffic violations, there are some traffic laws that may be more likely to come up after an accident.

If you think the driver who caused your crash broke the rules of the road or was cited by police after the crash, you may be eligible to seek compensation. Give Phillips Law Group a call today to discuss potential legal options.

An experienced attorney can be invaluable as you seek maximum compensation for your damages. Proving a moving violation may not be as easy as you think, and you could greatly benefit from having an attorney at your side.

Driving Under the Influence

Arizona, like every other state in the U.S., prohibits licensed drivers from operating a motor vehicle when their blood alcohol content is 0.08 or higher. Unfortunately, many accidents that involve an impaired driver result in life-changing injuries or death.

Assessing fault for many of these crashes may not be very complicated. There is often catastrophic damage to all vehicles involved and that damage often clearly indicates the drunk driver is the one at fault.

However, it is always a good idea to call the police after any collision, even one that is seemingly minor. It is possible the other driver may be drunk or under the influence of drugs. At the scene, the responding officer can assess the other driver and determine the need for a field sobriety or breathalyzer test.

If you notice signs of impairment from the other driver, make sure to inform the police when they arrive. This type of behavior could include:

The police report completed by the responding officer may also help your attorney establish the other driver is at fault for the crash.

Drivers are responsible for knowing the speed limit wherever they go. If you drive faster than that posted limit, the police have the authority to pull you over and issue a ticket.

While it is sometimes clear the driver who caused your crash was speeding, other times it may be difficult to tell. It may be necessary to have an experienced attorney analyze the damage to your vehicle or obtain video footage of the crash from a nearby traffic camera or dash cam.

Sometimes the responding police officers can assess whether the at-fault driver was speeding. This information is something they would likely indicate on the police report.

Obeying speed limits may not only lower your risk of a crash, doing so may also help prevent you from being assigned a small percentage of fault for a crash.

Using a Cellphone While Driving

It is illegal to use a cellphone while behind the wheel in Arizona. The law says you may not use a standalone electronic device (cellphone, tablet, gaming device) while your car is in motion:

However, drivers are still permitted to use hands-free devices. You may also engage a GPS device to start a route and use a mobile device in an emergency to call for help.

Unfortunately, the law does not stop many drivers from making phone calls, sending text messages or even watching videos and posting things to social media.

It can be difficult to prove distracted driving without help from an experienced attorney. He or she may need to subpoena cellphone records or have an accident reconstruction expert review the scene. You may also need testimony from witnesses who saw the other driver texting or making a phone call.

Sometimes damage to the victim’s vehicle may indicate fault for the crash. For example, if you were injured in a rear-end crash but the at-fault driver’s vehicle did not make any skid marks, it may indicate the driver never hit the brakes because he or she was distracted.

Running red lights, blowing through stop signs and trying to complete a turn when there is not enough time to make it through an intersection are all examples of right-of-way violations.

One of the reasons these types of traffic violations are so dangerous is that we expect other drivers to respect the right of way. For example, when a traffic light is green, we go through the intersection almost without thinking about it. If a driver runs a red light, you may have no chance to move out of the way or stop.

That is why every state has laws that govern the right of way for drivers. These laws are designed to prevent crashes at intersections and other places where vehicles cross paths. If these laws are followed, there is a much lower risk of getting into a collision that could result in injuries.

Under Arizona law, if a crash causes death or a serious physical injury, and it was caused by one of several types of moving violations, the at-fault driver could face criminal liability.

Some common moving violations include:

Penalties for these moving violations may include fines, jail time, license suspension and/or community service.

Serious physical injury refers to an injury that carries a reasonable risk of death or results in serious and permanent disfigurement, impairment of health or lost function in any organ or limb.

Criminal charges and/or a criminal conviction of the driver who caused your crash may help your attorney build a civil case against him or her as you seek compensation for your damages.

Have Questions About Your Claim? Call Today

There is nothing wrong with reaching out for help after a car crash. There is a lot to sort out after a crash, but talking to a lawyer could help clarify your options.

The Phoenix-based auto accident lawyers at Phillips Law Group are prepared to manage your claim so you can stay focused on your medical treatment. We have secured hundreds of millions in compensation and have represented numerous crash victims.

The initial consultation is free and there is no obligation to hire our firm. We do not charge upfront fees, so there is no risk in talking to us about how we may be able to assist you.