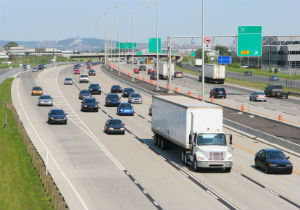 According to the Arizona Department of Public Safety, the accident was caused by a wrong way driver.

Wrong way crashes have increasingly become a concern in Arizona, despite efforts to warn wrong way drivers that they are entering a road or highway in the incorrect direction.

Just before 7:00 a.m. Friday morning, an elderly driver merged onto SR 347 via a southbound ramp. Despite having used a southbound ramp, the elderly individual was headed in a northbound direction.

For this reason, local authorities speculate the driver incorrectly merged onto the highway via an exit ramp, as opposed to using a southbound on-ramp.

Once the wrong-way vehicle was sighted, oncoming traffic slowed to a halt. As traffic slowed, a motorcycle struck the rear end of a vehicle.

The motorcyclist and several passengers in the vehicle sustained non-life threatening injuries and were transported to a local hospital for treatment.

Witnesses stated that the elderly driver slowed to a stop once the accident occurred.

In an effort to decrease the number of wrong way crashes in Arizona, the Department of Transportation (ADOT) has erected larger, more visible “Do Not Enter” and “Wrong Way” signs at various highway exit ramps. Large, reflective arrows that denote the correct direction of travel have also been added.

Yet, despite ADOT’s efforts, wrong way accidents continue to rise in Arizona, leaving many to wonder if ADOT’s current precautionary measures are enough.

Some local residents feel ADOT should install electronic sensors on all highway exit ramps. The sensors are able to detect wrong way drivers entering the ramp and can immediately send a signal to law enforcement officials. Currently, such sensors are in use on two exit ramps off Arizona 101.

Nearly every week, a wrong way collision occurs on an Arizona roadway. If you or someone you love has been the victim of a wrong way accident, call the auto accident lawyers at Phillips Law Group today. We can help you get the justice and compensation you deserve.