Parental Liability for Crash Caused by a Teenage Driver 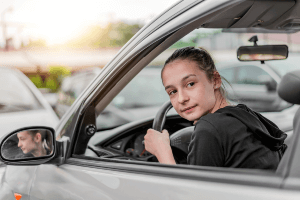 The simple answer is yes, parents can be held liable if their child causes a car crash. Often, the child is on his or her parent’s car insurance policy. The liability insurance on that policy would likely the cover the other driver’s damages, up to the policy limits.

The victim of the crash may also be able to file a lawsuit against the child’s parents for damages under Arizona’s parental responsibility laws.

If you have been injured in a car accident with a minor, give our firm a call today to discuss your legal options for pursuing compensation. Our Phoenix-based auto accident lawyers are ready to help you pursue full compensation for your damages. The initial consultation is free and there are no upfront fees.

Pursuing a Claim After an Accident with a Teenage Driver

Even though a parent was not in the car at the time of the crash, his or her auto insurance is often the one used to pay for damages from an accident caused by a teenage driver. This is generally because the teenager is on his or her parents’ car insurance policy ”“ sometimes parents pay for this and sometimes the child pays to be added to the policy.

What if a Teenager was Driving a Car Loaned to Him or Her by Someone Else?

If you loan your car to someone else, and he or she lets his or her teenage child drive the car, your insurance will likely cover damages the child causes in a crash. That said, things may be more complicated if you loan your car to someone and tell them not to let their teenager drive the car. If you did not give permission for someone to drive your car, it is possible you will not be held liable for damages that may be caused by a crash.

What if a Parent Prohibited a Teenager from Driving Their Car?

Sometimes parents buy a car for their child to use and prohibit them from driving mom or dad’s car. Would the parent’s insurance policy still apply after an accident?

This is a complex question you should discuss with a licensed attorney. Insurance coverage follows the car, but the child was prohibited from driving the car involved in the accident. If you left the keys in a place where you know your child might find them, it may be tough to argue there was no implied permission to take the keys and drive the car.

Most car crashes caused by teenage drivers were simply the result of negligent behavior, such as texting and driving or speeding. However, there may be situations where the teenage driver’s actions were willful or malicious.

These actions are covered by Arizona’s parental responsibility laws. Essentially, these laws state parents may be held strictly liable for these actions. In other words, parents could be held liable even if they did not have a reason to anticipate these actions by their child.

Even though the child may be at fault, insurance policies may exclude coverage for willful or malicious actions. That may mean the parent would be unable to use the insurance policy to cover damages. If a victim filed a lawsuit in that situation, the parent may be personally responsible for the damages.

It is important to note parents cannot be sued for non-economic damages under Arizona parental responsibility laws.

Need Help After an Accident? Give Phillips Law Group a Call

For nearly three decades, our firm has been recovering compensation on behalf of accident victims throughout Arizona. We know compensation cannot change what happened, but we understand how important it is as victims look to move forward.

There is no risk in contacting us because there are no upfront fees. There is also no obligation to hire our firm. Once we determine if you may have a case, you decide if you want to move forward.