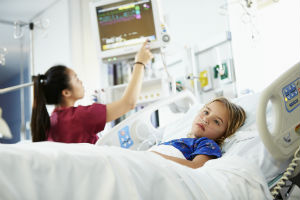 In an alleged case of severe medical malpractice, a neurosurgeon at the Barrow Neurological Institute of St. Joseph’s Hospital and Medical Center in Phoenix sent a critically ill child home because her mother “had a tendency to overreact” and “was not going to like what [he] did next.”

The child’s mother, who worked in a neurological intensive care unit at a different hospital, expressed concern over the lack of appropriate treatment her 12-year-old daughter was receiving while under the care of several physicians at two separate facilities in Phoenix.

Allegedly realizing the child’s declining health was due to consistent medical negligence, neurosurgeon Dr. Harrold Rekate, M.D., fabricated stories about the child’s mother interfering with the care her daughter was receiving, saying the mother “refused to follow the advice and treatment plan” that he had implemented.

Although the girl had suffered a stroke due to negligent medical care and was being fed through a nasogastric tube, Dr. Rekate order her to be discharged from the hospital. He then terminated his doctor-patient relationship with the child, placed her in a wheelchair, and sent her home.

At the time of her discharge, the child was suffering from a rare neurological disorder that made it virtually impossible for her to move, and which required her to have a shunt implanted in her brain to help reduce cerebral swelling.

Shortly after being sent home from the hospital, the girl’s mother sought medical help for her daughter once again. This time, however, hospital staff members contacted Child Protective Services and had the girl removed from her mother’s care and placed in a foster home.

While living with her foster mother, the girl’s condition quickly deteriorated to life-threatening status, as the foster mother would not take the girl to any doctor’s appointments or seek medical attention when the child began vomiting and complaining of severe headaches.

At the request of the child’s biological mother, the well-known pediatrician and child advocate Dr. Eli Newberger, M.D., reviewed the girl’s medical records and contended the child was inappropriately cared for during her time at both area hospitals.

Dr. Newberger also attested that the girl’s mother did not overreact to the severity of her daughter’s sickness, therefore the child should be taken out of foster care and reunited with her biological mother.

While she is currently living with her mother and receiving appropriate care from a different neurosurgeon, the child has suffered both physically and emotionally from the alleged medical malpractice and neglect. It is unknown if the child will make a full recovery.

Every day, thousands of Arizona residents entrust doctors and hospitals with their health, safety, and well-being. But when a medical professional acts in a careless or negligent manner, the consequences can be devastating.

The medical malpractice lawyers at Phillips Law Group have represented hundreds of hospital patients who were hurt by improper medical care during their hospitalization. Contact us today. A personal injury lawyer based in Phoenix, AZ can help you get the justice and compensation you deserve.