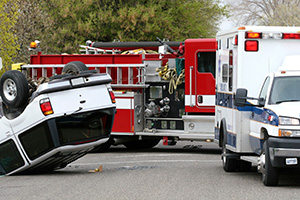 Local law enforcement officials have determined the victims were not wearing their seat belts at the time of the crash.

While the outcome of the crime scene investigation is still pending, it is believed that speeding and careless driving may have played a role in the accident.

At approximately 2:15 a.m. Monday morning, near the intersection of Greenway Road and Grand Avenue, the driver of an SUV lost control while attempting to make a left turn.

Shortly thereafter, El Mirage police were called to the scene of the accident, where they found the vehicle’s two occupants lying deceased alongside the roadway.

The driver and passenger were not wearing their seat belts at the time of the crash and were ejected from the vehicle once it began to roll.

Police say the victims would likely have survived the accident if they had been wearing their seat belts.

The identities of the victims have not been released, as their family members have yet to be notified of their passing.

According to the Centers for Disease Control and Prevention, car accidents are the leading cause of death among U.S. residents between the ages of five and 35.

The most reliable method of preventing death from a car crash is to wear a seat belt.

However, millions of drivers and passengers choose not to wear their seat belt when inside a moving vehicle. Because of this choice, nearly 60 percent of all unrestrained motorists die in collisions that would not have been deadly otherwise.

In fact, according to research conducted by the Naval Safety Center, only one percent of motorists who were wearing their seat belt at the time of a car crash were ejected from their vehicle.

The remaining 99 percent of occupants who were unrestrained were ejected from a vehicle during a crash. Many died as a result of the injuries they received.

Statistics prove that, regardless of the type of accident you are involved in, wearing your seat belt can reduce your chances of dying by more than 50 percent.

Don’t make police officers have to notify your family of your death following a car accident. Wear your seat belt every time you get inside a vehicle.

No matter if you are the driver or the passenger, if the car trip is lengthy or short, or if you have had your license for several years or several days, always wear your seat belt. Doing so can save your life.

If someone you love lost their life in an auto accident due to another driver’s carelessness or negligence, contact the knowledgeable and compassionate car accident lawyers at Phillips Law Group today. Our experienced Phoenix personal injury lawyers can help determine your legal rights and get you the justice and compensation you deserve.