Evidence That May Show an At-Fault Driver was Speeding 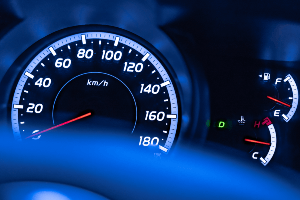 Many car crashes are caused by drivers who were speeding, even if it was only a few miles per hour over the limit. The faster the driver was traveling, the higher the risk of serious injuries from the resulting crash.

While each crash is unique, if one of the drivers was speeding, he or she is likely the one at fault. However, you may be unsure about how to prove the at-fault driver was speeding ”“ unless you had a radar gun and were aiming it at the other driver’s vehicle at the time of the collision.

Fortunately, there are other ways an attorney may be able to establish the at-fault driver was traveling over the speed limit. Below, learn more about proving a driver was speeding and why it can be very helpful to have an attorney helping you out with this type of claim.

Proof of a Driver’s Speeding

Like it or not, we are being monitored by a variety of technology, including cameras, websites and even devices in our cars. Newer cars often have electronic data recorders that record various pieces of data, including the speed of the vehicle and when the driver hit the brakes. These recorders may also note steering input and possibly the use of a seat belt.

If a driver was speeding at the time of the accident, it is likely this was noted by the electronic data recorder. However, you are likely going to need the permission of the vehicle owner to download data from this device. It can be helpful to have a licensed auto accident attorney in Phoenix to help you with something like this.

Some drivers install dashcam recorders in their vehicles that may help attorneys determine the approximate speed of the vehicle in question. If the dashcam is in your car, you can simply tell your attorney and give him or her access to the relevant footage. If the dashcam was in the at-fault driver’s car, you will need to ask for it.

Witness testimony may be especially helpful in an accident involving a vehicle that was going way beyond the speed limit, such as crash on an interstate highway involving one vehicle traveling at more than 90 mph.

When the police arrive at the accident scene, they will interview both drivers to determine what happened. They will also analyze the scene to determine if any traffic citations should be issued. They may write in their report whether they think one of the drivers was speeding and if this factored into the collision.

If a traffic citation was issued for speeding, it would be hard for an insurance company to dispute it.

If you thought the car was speeding when it hit yours, tell the officer. If you felt the car was going much faster than the others around you, the driver may have been speeding.

Analyzing Vehicle Damage and Physical Evidence from the Crash

Vehicle damage and other physical evidence may also indicate one of the drivers was speeding at the time of the crash.

For example, your attorney may review skid marks left on the pavement. The longer the skid marks are, the more likely the car that left them was speeding. If a car is speeding, it will take longer to stop, resulting in longer skid marks. On the other hand, if there were no skid marks and the crash caused catastrophic damage, speeding was likely a factor in the accident. If a driver was speeding and not paying attention, he or she may have had very little time to hit the brakes.

When the damaged vehicles are assessed by the repair shop, they are likely to refer to the collision ratings for each vehicle. These ratings are based on the damage done based on the speed at which the vehicle was hit.

Your attorney may consult an accident reconstruction expert to help determine exactly how the crash occurred and whether speed was a factor.

How Can You Help Build Your Case?

Whenever possible, accident victims should take pictures at the scene of the accident. Pictures of skid marks, damage to both vehicles, debris and anything else that may be relevant could be very helpful. Once you leave the scene, it is likely things will be cleaned up and permanently altered. The minutes after the crash may be the only chance you have to document exactly how the scene looked after the crash.

Injured in a Crash with a Speeding Driver? Call Phillips Law Group Today

There is no upfront fee for our services, and we do not get paid for representing you unless we recover compensation for your damages. We are here to answer your questions and determine how we may be able to help you.