Phoenix Intersections Known to be High-Risk for Crashes 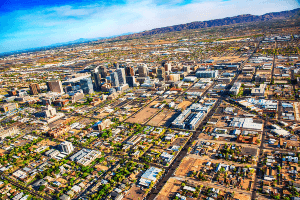 There is always a risk of a crash when you get behind the wheel. Even if you drive defensively and stay focused on the road, you might get hit by a reckless driver and suffer serious injuries.

While this could happen anywhere, there are certain places where you may be at greater risk of getting into a crash. Below, learn more about some of the most dangerous intersections in the Phoenix area and what the risks are.

If you have questions after a crash that was caused by another driver, call our Phoenix-based car accident lawyers to schedule a free legal consultation to learn more. There are no upfront fees for our services.

The Phoenix metropolitan area has hundreds of thousands of drivers and is the most populous part of the state by far. With so many people behind the wheel, many of them commuting to and from work, there is a high risk for crashes daily.

While there are many dangerous intersections in the Phoenix area, here are just a few you may want to avoid, or at least use extra caution when passing through.

The Maricopa Association of Governments ranked the top 100 intersections in the Phoenix area based on crash risk, using crash data for 2015-2019. This intersection was the second highest in the rankings. There was a total of 273 crashes at this intersection between 2015 and 2019. Pedestrians are also at high risk in this area.

This area is especially dangerous in the morning and the evening when people commute to and from work. There is also a lot of traffic in the mid-afternoon when students are returning home from school.

This intersection ranked third for crash risk with 246 crashes between 2015 and 2019. Commuters often go through this intersection to avoid I-10 but fail to slow down out of consideration for residential traffic.

This area is prone to heavy traffic, as there are many shopping centers nearby, along with many condominiums. Unfortunately, people get impatient and drive recklessly in heavy traffic, increasing the risk of an accident. There were 134 crashes between 2015 and 2019.

Grand Canyon University is nearby, and this causes much of the congestion. Students and employees coming and going makes this area a beehive of activity.

This intersection was ranked 10th in the Maricopa Association of Governments rankings. There were 203 crashes between 2015 and 2019.

Tens of thousands of vehicles pass through here every weekday. This is one of the busiest intersections in the entire county. Each year, there are approximately 130 crashes in this intersection. The problem with this intersection is that it is near apartments, a high school, a park and there is a mall a short distance away. Unfortunately, people often run red lights in this intersection, which is extremely dangerous.

Some of the other dangerous intersections in Phoenix include:

If it is possible to avoid a dangerous intersection, you should do so. However, sometimes taking a detour adds a lot of time to a commute or another type of trip.

That said, you can still take precautions when travelling through a dangerous intersection. For example, if you need to make a left turn, and you are turning on a green light instead of a green arrow, make sure you have plenty of time to get across the lane of oncoming traffic. You should also watch for pedestrians because they often fail to look for cars that may be turning into their path.

It is also important to drive defensively, which means you should not assume other drivers will be careful. People often try to cut across multiple lanes of traffic to get into a turn lane. People run red lights, change lanes in the middle of the intersection and check their phones while driving.

You should also slow down in dangerous intersections because you will have more time to react to danger. If someone cuts you off, you may have a chance to hit the brakes to avoid a crash.

Call Phillips Law Group for Help After a Crash

Our firm has assisted auto accident victims for nearly three decades and we have obtained millions in compensation on their behalf. This includes a recovery of $4 million for a crash victim who suffered a spinal cord injury that resulted in paralysis.

If you have any questions after a crash, we are here to answer them. The initial consultation is free of charge and comes with no obligation to take legal action. That means there is no risk in contacting us. If we validate your claim, there are no upfront fees.