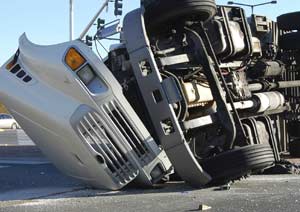 A pile-up crash involving 24 vehicles forced a portion of Interstate 17 to close on Sunday afternoon after a cattle hauler crashed into incoming traffic. A motorcycle accident earlier that day also closed portions of the highway.

The driver of the semi-truck carrying the cattle was unable to stop his vehicle as it came speeding into a congested group of vehicles ahead. The truck proceeded to rear-end and side-swipe nearly two dozen vehicles that were in the path of the out-of-control truck.

The accident occurred around 1:30 p.m. on Sunday afternoon and caused the portion of Interstate 17 north of Phoenix, near Sunset Point, to shut down until shortly before 10 p.m.

The vehicles in the trucks’ path were shoved off the road, causing injuries to several drivers. A total of 17 people were taken to hospitals in the Phoenix area. There were four people with injuries ranging from moderate to severe that required them to be air-lifted from the scene of the accident.

The Arizona Department of Transportation advised motorists to seek an alternate route, as traffic was being re-directed away from the accident scene.

State Troopers are investigating why the driver and vehicle were unable to slow down and stop before colliding with the incoming vehicles.

The pile-up caused by the cattle hauler was the second major accident on Interstate 17 on Sunday. Earlier that day, a fatal motorcycle accident occurred near New River Road that caused traffic to back up for nearly eight-miles.

The motorcyclist was reportedly not wearing a helmet at the time of the crash and did not survive. The incident caused several lanes to close and a brush fire to break out along the road.

If you or a loved one has been injured in an accident involving a semi-truck, then you may be entitled to compensation. The truck accident attorneys at Phillips Law Group have experience fighting for the rights of those who have been affected by truck related crashes. We offer a free consultation to review your claim and determine if you have a case.