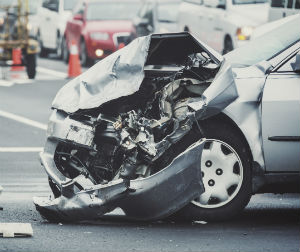 One person is dead after a vehicle crashed into a Phoenix apartment building in the early morning hours of May 31.

Police had tried to pull over the driver at 27th Avenue and Thomas Road for a faulty light, but he continued to flee. Police stopped chasing him before the crash occurred. The man’s grey Ford Taurus was seen speeding on McDowell Road before crashing into a fire hydrant, fence and finally the apartment building. The driver died at the scene and no other injuries were reported. Police are awaiting the results of a toxicology test to determine if the driver was impaired at the time of the accident.

Eight residents have been displaced after portions of the apartment building were evacuated. However, the lack of water service may require more residents to be evacuated.

According to one man living at the complex at 3830 W. McDowell Road, he woke up covered in pieces of the wall struck by the vehicle. He suffered only minor scrapes, bruises and soreness. Luckily, he was the only one home during the crash as his children were at their grandparent’s home.

Phoenix Crisis Response Units were at the scene on the day of the accident assisting residents.

Though it is unknown if the driver was under the influence, the high rate of speed and failing to stop at red lights contributed to this terrible collision. Speeding is one of the top causes of all motor vehicle accidents in the U.S. and it led to more than 20,000 accidents throughout Arizona in 2014.

The experienced car crash attorneys at Phillips Law Group understand the devastation speeding accidents can cause, including serious property damage. If you have suffered losses as a result of a careless driver’s actions, contact our firm for a free legal consultation. You may be entitled to compensation.