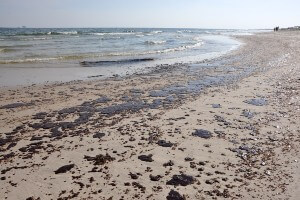 A leak on an oil pipeline situated off the coast of Southern California resulted in about 127,000 gallons of crude oil spilling into the Pacific Ocean and washing ashore. The oil spill has shut down several beaches and coastal areas, including Huntington Beach and Newport Beach, and has harmed local wildlife.

The leak was reported on Saturday about five miles from Huntington Beach in Orange County and appears to have stopped. Oil removal efforts are well underway but the damage may have already been done. Officials are calling the incident an environmental catastrophe that has left fish dead, birds covered in petroleum and wetlands contaminated. This oil spill may also potentially harm human health.

Southern California residents may be facing a toxic coastal environment for years afterward. Orange County health officials are advising residents to avoid any recreational activities on the coastline and should seek medical treatment if they come in contact with the oil as it can cause eye and skin irritation.

In addition to ecological damage, there may be other implications, such as property damage or lost income for business owners and workers while the beaches remain shut down. If you have been impacted by the California oil spill, Phillips Law Group may be able to help. You may be eligible to pursue compensation for your economic losses. The initial consultation is free of charge.

How Did the Massive Oil Spill Happen?

A 17-mile pipeline connected to an offshore oil rig platform ruptured, spilling 3,111 barrels of crude oil that spans about 13 square miles. The U.S. Coast Guard was notified of the oil spill on October 2nd after workers conducting a line inspection noticed a sheen in the water.

The pipeline has been suctioned at both ends to stop the flow of oil into the ocean, but the exact source of the oil spill is still being investigated by federal, state and local agencies.

Who Is Responsible for the California Oil Spill?

The oil spill came from the oil rig platform Ely, which is managed by the Beta Operating Company. However, Beta’s parent company, Amplify Energy, owns the pipeline. Amplify Energy is a small and independent oil and gas company based in Houston, Texas, with around 200 employees.

The facilities that operate the pipeline in question were built in the late 1970s and early 1980s and are inspected every other year. Prior to the oil spill, the owner of Amplify Energy filed for bankruptcy in 2017 and the company has also been cited 72 times for safety and environmental violations.

Present and Future Impact on the Area

The spill has already done considerable damage. The oil has infiltrated the wetlands, harming birds, fish and other wildlife. The spill has impacted marshes that threaten the extinction of certain species.

There are also concerns about the amount of economic harm that the community will likely endure. It may be several weeks before businesses that operate along the coastline start having customers again. Commercial fishermen who depend on the Southern California coast may lose out on income for an entire season if their fishing grounds continue to remain off-limits.

Residents who own coastal properties may even be facing damage to their properties. Oil spills can contaminate the water and land, spreading through the ground and making a property unsafe to live on.

Lawsuits Being Filed Due to California Oil Spill

Amplify Energy is facing numerous lawsuits filed by individuals and businesses harmed by the incident.

One complaint was recently filed in the U.S. District Court for the Central District of California on behalf of a disc jockey who regularly performs in Huntington Beach. The plaintiff is seeking damages for business he will lose out on because of the oil spill.

Laguna Beach waterfront property owners have also filed a lawsuit against Amplify Energy seeking damages for loss of enjoyment, potential lowered property values as well as diminished rental income. The lawsuit alleges that the incident could have been prevented had the company adequately maintained the pipeline instead of leaving it “susceptible to corrosion and rupture.”

Other claims that may be made against the company include failing to:

If the California oil spill has affected your business, your ability to work or caused significant damage to your property, contact our lawyers at Phillips Law Group to learn more about your rights. We are ready to hold any negligent company accountable for its actions and seek compensation on your behalf.

Reach out today to schedule a free consultation. There is no obligation after this initial meeting to retain our services, however if you do decide to hire our firm, we charge zero upfront fees.