AZ has the Most Dangerous Railroad Crossings in U.S. 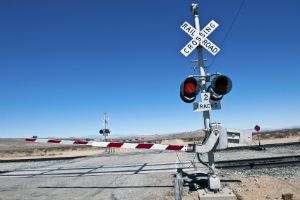 According to data released yesterday by the Federal Railroad Administration (FRA), Phoenix tops the list of U.S. cities with the most dangerous railroad crossings. Because Glendale also made the list, Arizona is the only state in the country to have more than one crossing with a particularly high occurrence of train accidents. It is also the only state to have more than one crossing on the FRA’s “Top 13 Most Dangerous Railroad Crossings” list.

The FRA discovered the “top 13” after compiling a decade’s worth of accident statistics from over 200,000 railroad crossings across the United States. The data showed 13 of these crossings were particularly dangerous, and five of these crossings were located in the Phoenix metro area. Additionally, two more were located in Glendale. The 13 crossings made the list because they each had at least 10 accidents in the past 10 years.

The railroad crossings with the first, second and fifth highest accident rates in the country are in Phoenix, while those ranked third and 12th are in Glendale. The Arizona crossings that made the “Top 13” list include:

The accidents at these crossings involved a variety of circumstances, including trains hitting vehicles stopped in the crossings, vehicles running into moving trains and pedestrians being struck while crossing the tracks.

Each of the Phoenix and Glendale crossings have 12 trains passing through each day, and all have heavy vehicle traffic on a regular basis. More than 30,000 vehicles pass through the five dangerous railroad crossings in Phoenix each day.

According to Brian Lehman, head of Arizona Corporation Commission’s Railroad Safety Division, heavy traffic and a lack of warning gates at two of the dangerous Phoenix crossings are currently being addressed in an effort to increase safety. However, Lehman did not know when improvements would be made, because doing so requires approval from the state, the cities of Phoenix and Glendale, and the BNSF Railway Company, which owns all railroad tracks in Arizona.

Lehman is remaining optimistic, however, as the FRA’s recently released data helps show where repeat railroad crossing injuries and fatalities occur, which in turn helps the state and related organizations focus their time and resources on areas where they can have the most beneficial impact.

If you or someone you love was injured at a dangerous railroad crossing, the experienced Glendale personal injury lawyers at Phillips Law Group can help you receive the justice and compensation you deserve.