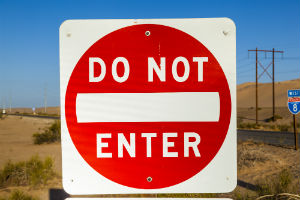 After the seventh wrong-way accident involving injuries or fatalities in Arizona so far this year, renewed focus is being placed on efforts to prevent wrong way drivers.

Wong-way driving collisions are one of the most severe auto crashes because they often result in serious injuries or death.

Since 2015, ADOT has been developing a pilot program to improve the state’s methods of detecting and stopping wrong-way drivers.

The program is in its final stages as a prototype system that would identify and track wrong-way drivers for state law enforcement to follow and apprehend.

The system will include flashing LED warning signs that will alert drivers when they are traveling in the wrong lane and should self-correct their driving pattern.

The system will activate alerts on overhead message boards along interstates to alert motorists that a wrong-way driver is traveling in their area.

Cameras installed along roadways will also automatically focus on a wrong-way driver to help law enforcement identify and track the vehicle.

ADOT also plans to install thermal sensors on roadsides to measure the location of wrong-way vehicles and allow law enforcement to track the driver along mainline freeways.

ADOT will also install hundreds of larger and lowered “Wrong Way” and “Do Not Enter” signs, as well as large white “right way” arrows on off-ramps with reflectors that glow bright red when a vehicle is traveling in the wrong direction.

ADOT will test its prototype program on Interstate 17 between Interstate 10 and Loop 101 in Phoenix. The agency intends its prototype system to enable state law enforcement to directly target wrong-way drivers instead of relying on alerts provided by 911 callers.

Wrong-Way Accidents in Arizona During 2017

Within the first four months of 2017, there have been seven wrong-way collisions in Arizona resulting in injuries or death.

The seventh collision occurred early Friday morning when a 21-year-old driver collided with another vehicle after traveling southbound in a northbound lane on Interstate 17.

The collision occurred around 2:30 a.m. and claimed the lives of the wrong-way driver and the two occupants of the other vehicle, sisters from North Carolina ages 18 and 20.

Two of the three victims in the collision, including the wrong-way driver, were students of Grand Canyon University. Police have not ruled out impairment as a factor in causing the collision.

In 2016, there were 1,600 incidents of wrong-way driverson Arizona’s roadways reported to state law enforcement agencies.

From 2004 to 2014, there was an average of 22 confirmed crashes and eight fatalities caused by wrong-way drivers per year, according to the ADOT.

Approximately 60 percent of wrong-way drivers in 2016 were found to be impaired by either drugs or alcohol, according to the Arizona Department of Public Safety.

Currently, the most effective method for preventing wrong-way collisions is for drivers to alert law enforcement to a vehicle traveling in the wrong direction and to avoid the hazard as safely as possible.

Help for Those Affected by Wrong-Way Drivers

The impact of collisions caused by wrong-way drivers is often far-reaching and devastating for those involved.

If you have been injured or lost someone you love in a wrong-way driving crash, you may be able to file a claim to recover damages for your suffering.

At Phillips Law Group, we are committed to helping victims and their families seek the justice and compensation they deserve after suffering because of another’s negligence.

Do not wait to contact us for a free legal consultation with a car accident attorney to determine if you can pursue legal action. All of our services are provided to clients on a contingency fee basis, which means we will not charge you any upfront fees. The only time you pay us is if we recover damages on your behalf.