Arizona Has Deadliest Interstate Highways in the Nation 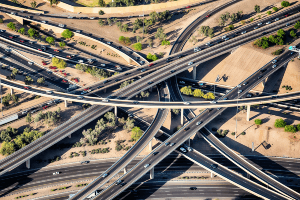 Bad driving causes many accidents each year, and in the case of Arizona’s interstate highways, bad driving helped turn these roads into the deadliest interstates in the nation in 2018.

While TRIP’s director of communications says interstate fatality rates are due to poor funding that results in poor road conditions, public and private officials in the state say reckless driving behavior is the reason for the high death rate.

Between 2015 and 2019, 43 percent of those who died on an interstate were killed in a crash where speeding was a factor. Another 36 percent died in crashes where impairment was a factor. The Arizona Department of Transportation cited these statistics in a statement about the 2019 Arizona Motor Vehicle Crash Facts report.

The statement noted that these are preventable deaths. They can be avoided by drivers making better decisions.

While the news about interstates is alarming, the overall number of deaths on all Arizona roadways reached a three-year low in 2019.

TRIP’s director of communications, Carolyn Bonifas Kelly noted that research from the National Highway Traffic Safety Administration (NHTSA) shows road conditions contribute to one third of all accidents across the nation.

While interstates are some of the safest roads in the U.S., research shows states should continue to make safety improvements to help prevent crashes. It is estimated that safety features on Arizona interstates saved 113 lives in 2018 alone.

Unfortunately, making safety improvements may be much more difficult because of a reduction in transportation revenue caused by the pandemic. TRIP estimates $50 billion in highway funds could be lost over the next year and a half.

Injured in an Interstate Crash? Call for Legal Help

If you were injured in a crash on an Arizona interstate, or you lost a loved one in a crash on an interstate, Phillips Law Group offers a free legal consultation with a licensed attorney. Meeting with a lawyer can be an important step in the recovery process for crash victims.

Our Phoenix car accident lawyers are not paid unless our clients receive compensation through a settlement or courtroom verdict. That means there is no risk to you in talking to one of our experienced attorneys.

Phillips Law Group has obtained more than $1 billion in compensation on behalf of our clients, including recoveries of $4 million and $3.1 million for crashes that caused severe injuries.